Children, youth, and adults need to do the right things at the right time to develop in their sport or activity. Junior Curling is about preparing to be adult curlers through the Long Term Athlete Development model. The stages are FUNdamentals; Learn to Train; Train to Train; Train to Compete; Train to Win; and Active for Life. The earliest level of curling is Little Rocks. Then youth levels are U12 and U15 and finally, junior levels are U18 and U21. Many of Fort Smith’s most successful curlers have advanced through all stages as they developed their skills.

Age categories are determined as of June 30th prior to the beginning of the curling season/championships. For example, to be eligible for U21 during the 2020-2021 season, a player must be 20 or under as of June 30, 2020.

NWTCA Rock the Rings Competition – The NWTCA has developed a competition to allow youth curlers to participate in a fun event against their peers and to meet other curlers. It will also be used to prepare U12 and U15 athletes for competitive curling and the U18 and U21 championships. It is expected that all athletes are able to throw the regular size curling stone the full length of the ice and understand and follows on-ice and off-ice curling etiquette. The event is geared towards all athletes who have participated in a junior curling program where they were taught both technical and team components of curling. U12 has a focus on “Learn to Curl/Train” and U15 has a focus on Train to Train.” Click Here for more information about Rock the Rings. 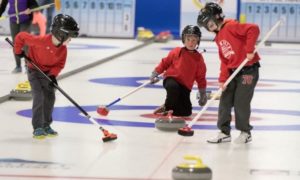 Little Rocks is all about learning to curl and having fun at the same time. The focus is on the “FUNdamentals of curling.” Getting kids started early and on the path of long-term athlete development helps to implant the philosophy of “Sport for Life.” Our smallest curlers use smaller rocks and modified ice surfaces. The focus is on Fun, Friendship, Etiquette, and Safety while learning curling skills that will last a lifetime.

The Arctic Winter Games is a high profile circumpolar sport competition for northern and arctic athletes.  The Games provide an opportunity to strengthen sport development in the participants’ jurisdictions, to promote the benefits of sport, to build partnerships, and to promote culture and values.  The Games celebrate sport, social exchange and cultures. The Games provide an opportunity for the developing athlete to compete in friendly competition while sharing cultural values from northern regions around the world.

Held once every two years, alternating between winter and summer, the Canada Games represent the highest level of national competition for up and coming Canadian athletes. The Games have been hosted in every province at least once since their inception in Quebec City during Canada’s Centennial in 1967, and feature events for able-bodied athletes as well as athletes with physical and intellectual disabilities.  Curling has been on every Canada Winter Games program since the very first Winter Games in 1967 in Quebec City, QC and has always featured both men’s and women’s competition. Mixed doubles curling will be introduced for the first time in 2023 in PEI.